Binn Group is living life in the fast lane. We have teamed up with classic car racing championship driver Alastair Baptie for the 2018 season.

The waste management company is sponsoring the 47-year-old Glencarse driver as he defends his title in the Scottish Motor Racing Clubs Classics Championship. Alastair has been driving “old bangers” since he was very young. His love of classic vehicles brought him into the racing circuit as “a more mature” driver.

“Although my father taught both my brother and myself to drive from six years old, work prevented any of us even thinking about racing,” he said, ” but being able to drive many different types of vehicle and machinery has helped me to learn fast about racing.

“Everybody loves the cars that they associate with their youth,” he said. “Their first vehicle or the model that holds happy memories of their early days behind the wheel. That’s why I love being a part of this series driving two of my favourites – a 30-year-old Fiat X1/9 and a classic MGB.” 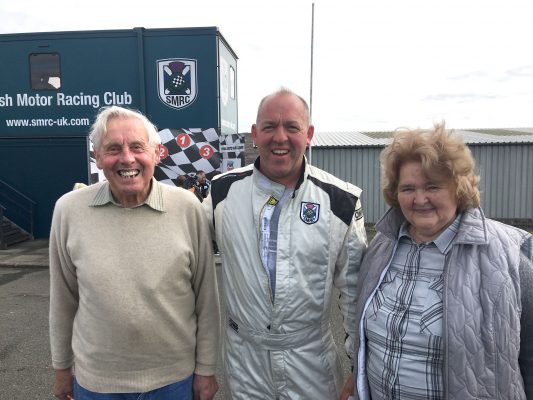 Binn Group has hi-visibility branding on both vehicles. They will compete in a series of races throughout the season at Knockhill Racing Circuit.

Alastair has already started the year strongly with two class wins under his belt at the first two races, leaving him sitting at the top of the table. He also succeeded in breaking his own lap record for his class, setting it at an impressive 60.2 seconds.

And, Alastair is in no doubt that Binn Group’s backing has helped keep him in contention. “Thanks to Binn Group I was able to put a whole new set of tyres on the Fiat. This has made a huge difference to her handling and performance,” he said. “It’s really heartening that a major company like Binn Group is willing to back me through my second year on the circuit. I can’t thank them enough for their support. “People competing in any sport rely on sponsorship to help them make their mark. I’m extremely proud to sport Binn Group branding on my vehicles.”

The SMRC Classics Championship races at Knockhill are featured on YouTube for the armchair enthusiasts. The races attract thousands of spectators to the Fife circuit. Alastair’s next race will be on May 6.

As one of Scotland's largest recyclers with over 20 years of waste management expertise, we've developed an innovative, creative and supportive environment that generates organic growth and brings economic and social benefits to employees, the community, businesses and the environment.